An interactive marketing veteran, Christopher Hart has joined the iPullRank team as the new Director of Revenue. Get to know him and what he hopes to achieve for our clients. “Creativity and artisan craftsmanship are still key differentiators in the industry”

An interactive marketing veteran, Christopher Hart has helped B2B and B2C companies understand the metrics that matter and publish content online in a way that’ll get the best distribution. With over 25 years of experience in coordinating efforts between in-house teams and agencies, Hart has now officially joined iPullRank as Director of Revenue.

“Over the past few years, I’ve partnered with Chris on a few different projects and I’ve always been struck by both his technical skills and how authentic he is with people. Once I found out that he was open to new opportunities, I couldn’t pass up the chance for a conversation”

With an undergrad in Fine Arts, Chris started doing graphic design work for a B2B publishing company. Just 6 months into this job, he was invited to be part of a Skunkworks team assembled to figure out how “to put our stuff together online”.

“12 years later I was reporting into the executive board as a shared resource across multiple divisions of hundreds of websites, trade shows, and events,” says Chris. “It all happened because someone saw me reading an early release HTML One book”.

In an era before well-baked content management systems, he learned about which content and data are needed in a CMS, how specific pieces of content can create value for a page.

“In the publishing company it was all about site organization, publishing schedules, maximizing and dealing with duplicate content, internal site search functionality, newsletter, and ad server integration,” explains Chris. “While working in agencies, it was a bit different, and I soon realized that not every company has an understanding of digital marketing, SEO, content, and distribution from an executive level to boots-on-the-ground perception”.

Chris got his MBA in Marketing Management and eventually moved on to a direct response company in California. “They had a small SEO shop that had problems talking to their larger brands, and I was able to have deep C-level conversations with them,” remembers Chris. “We signed great deals and further built their SEO team, then the company was sold to a larger organization”.

With a clear understanding of SEO, content creation, outreach and distribution, he decided to explore the MarTech space, and ride the SaaS wave. That’s when the opportunity to work with sales teams first showed up.

“Not many members of sales teams had an Alpha to Omega understanding of how each of the tools could bring benefits to the client and which could enable larger or bigger sales,” explains Chris. “The overall theme has always been the ability to have wider and deeper conversations with individuals across many facets of the digital ecosystem”.

Working with large global brands and small-to-medium sized brands, he has helped companies become competitive and punch above their weight, creating unified projects and dealing with internal differences or disconnects across organizations.

“At the time I first became involved with the SEO industry, there were no real goals set for us. There were no courses online or career paths, so we had to learn on our own,” recalls Chris. “Now it’s easier to make people understand what’s needed and to make sure everyone is on the same page”.

And in an area where the ever-growing presence of tools and the fear of being replaced by machines becomes a constant, Chris goes back to his early days as a Fine Arts student, looking for creative ways to apply knowledge and insight to the efficiencies that machines help us achieve:

“I’ve seen enough of those ‘SEO is dead’ comments,” remarks Chris. “The machine will become really good at parsing through piles of data and come up with your mean, median and modes. This allows us to do mass quantity sample study analysis. But for the foreseeable future, you’ll need a level of intellect to dissect the information. Creativity and artisan craftsmanship are key differentiators between digital marketing businesses“

And in this industry with no absence of room for creativity and thought process, Chris now brings his skills on building sales teams, and sales enablement to iPullRank.

“I signed a few short term agreements in July 2019. As I started working with iPullRank the hours built up, so Mike and I decided to go for it,” says Chris. “I’ve known Mike for a long time, we’ve talked in the same events and been in similar industry circles for years. It was always a case of me liking Michael, and him liking me, and having similar perspectives in life, people, family in general.”

Christopher Hart, now the Director of Revenue at iPullRank, has already been key to helping us level up our Sales and Client Solutions teams. With a solid common respect between Mike and Chris, iPullRank has been realigning areas of the business to become even more effective, successful, and ready to make 2020 our best year ever.

Chris, welcome to the iPullRank team! 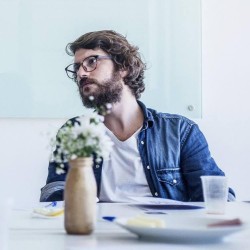 Danilo Romeiro
Danilo Romeiro graduated in journalism but ended up in an ad agency after meeting someone while unloading a truck for a set he was helping design. Years later, he is now a restless content strategist, planner, and manager. He uses data-driven solutions to find the human truths in analog and digital worlds.