The 2020 presidential election is around the corner, and we have seen a great change in search demand due to the COVID-19 pandemic. Here are the changes in search demand and how it will impact our upcoming election. How Nothing Was the Same After Coronavirus

In December of 2019, Coronavirus first appeared in Wuhan, Hubei, China and many of us immediately knew the virus posed a great risk to the world. While no one was sure just how dangerous the disease was at first, its quick spread and lethality made everyone take note. Today, saying that the widespread pandemic has affected everyone in some way would be a gross understatement. In fact, there are few things in this world that have not seen an impact from this virus.

Adjustments and Demand Shifts During a Pandemic

Living in NYC as it now appears to be the new epicenter of the virus, I have the unfortunate opportunity to see its effect on nearly every part of my life. Everyday activities like working, looking for a new apartment, filing a car insurance claim have all become virtual experiences (ask me about how GEICO appraised my accident damage some time). If I were to attempt to document everything that’s not the same amidst this global crisis, I may never finish writing and only have more to write with each passing day. And in the time I was writing this, I ended up catching COVID-19 myself (more on that in a future post probably). Instead, I wanted to take a look at something many Americans cared about before the pandemic became our new reality – the 2020 elections.

There is no hierarchy of current events in my mind that makes me prioritize the election over the path toward a  recession, spikes in unemployment, or the hospitals at their capacity with COVID-19 patients (at the time of this writing). However, I wanted to show how search is shifting through this example to demonstrate that everyone has a limited attention span that’s being occupied by the virus. The hypothesis was that with a seemingly never ending concern for your safety, less engaging topics like politics may fall by the wayside.

In what will follow, I will be looking at:

The tool uses a 0-100 scale based on searches being conducted on Google. If the same date ranges during the election years have numbers that are close, the search demand can be deemed unaffected. If, however, the numbers are different enough, we can assume that the search demand is affected by something. And while this isn’t a controlled experiment (different candidates, changes in technology, different forms of media, etc.), we will be able to see if anyone is still concerned about the presidential race during the pandemic.

COVID-19 Enters the US Scene and Everyone Takes Notice

To start this off, we first need to understand America’s interest in Coronavirus in the realm of Google Search. By seeing when people’s priorities begin to shift in the direction of this pressing health threat, we can deduce at which point their interest in politics may shrink.

On January 21, some search interest began to appear around the term “coronavirus” in the United States. This is no coincidence and was a direct result of the first identified US case in Snohomish County, Washington identified just 2 days prior.

The COVID-19 nomenclature gained popularity on February 11 after WHO gave the virus its new official name. The two names have been used interchangeably for the most part since.

It’s important to establish the timeline for the interest in this deadly disease as we will dive into how it has affected the overall interest in the US election. I will look at search trends before and after the pandemic begins to pick up search interest and also check how those trends compare to previous searches in the 2016 election.

Do We Care Who’s Running?

The early informational searches related to the election may be around finding the candidates running. Though the 2020 Democratic field was a who’s who of politics, I wanted to compare the run-up to 2016 to see how search interest compared.

I quickly realized that this year proved to have a greater search interest around the term “who’s running for president?” than 4 years ago (even when looking at November 2016 numbers). Granted, early March saw 4 candidates drop out of the race following bad outcomes in primary votes (Buttigieg, Klobuchar, Warren, and Bloomberg all dropped out within 5 days of each other), it looked like Americans were still paying attention amid coronavirus concerns and NYC on the brink of a shut-down.

Of course, it’s not impossible that the denial of the severity of the virus would leave many areas not significantly impacted from the search perspective. While we were stocking up on non-perishables and toilet paper in NYC, there were reports of many “brave” souls still partying it up in Florida as late as March 25. The most affected areas initially were Washington and New York. Naturally, I wanted to dig deeper to see if these epicenters dropped all interest in the election when the virus began spreading in their backyard.

Taking a closer look at the states affected most early on, we can see that the pattern remains somewhat similar even in states like Washington and New York.

Washington’s search interest in “presidential candidates” was higher in early March 2020 than around the same time in 2016. As the state that had the first confirmed COVID-19 cases, this suggests that the pandemic was not enough to distract Washington residents from following the election.

But did that same trend hold true for New York?

It did not. And as someone who is in New York throughout this time, it makes sense as unease was noticeable in people early on. While the difference year over year is not huge, we know that overall interest nationwide was up. Trying to get even more granular, I decided to look at the local data for areas that had first confirmed cases:

This graph more closely aligns with my expectations. But even here the difference was not one I’d call extreme (roughly a 21% decline year over year).

Are There Political Issues That Are More Important Now?

Although the interest in the upcoming election may take a backseat on the local level when the virus is prevalent in an area, the individual policies associated with candidates running could see a different change. Issues that become extremely pertinent during a crisis could actually see a spike in search interest. With lots of uncertainty around income, health benefits, and unemployment, people are searching for information on topics raised again and again during the election cycle. But how does this compare to 2016?

While medical insurance has been a topic of interest for a long time now, the pandemic highlights people’s need for coverage that is not tied to the employer.

Though “universal healthcare” did not see any major shifts in search demand in the months leading up to the 2016 election, the term spiked abruptly throughout final Democratic debates and the emergence of COVID-19 in America. This is not necessarily a correlation between the virus and people’s concern for health coverage but it may continue its path as many lose their coverage with their jobs.

Another political issue that has been raised and effectively led to the passing of the recent stimulus bill is the idea of a basic income. As many struggle to make ends meet, a safety net was deemed necessary and most of us got a check from Uncle Sam to help out. The term “basic income” is trending upward and will likely keep the conversation going. It is very possible that this isn’t the last time you see a stimulus check during the pandemic.

Keeping in line with financial struggles that everyone is going through, I wanted to include search demand for “unemployment insurance.” Though not a political talking point itself, the chart below demonstrates the severity of the situation brought about by mass unemployment. And while I’m hopeful things can get back to normal soon, the dependence on support from non-employment revenue is clear. As businesses were forced to close, many lost their job and began collecting unemployment. This type of reaction can be another argument that can reinforce the need for health benefits that are not tied to the employer and a basic income that acts as a safety net.

As the pandemic lingers, many Americans are also anxious to see a government response to the crisis. And as the race for the next US president tightens, that means citizens want to hear both from the sitting president and his opponent. With uncertainty brewing, Donald Trump’s actions and statements on COVID-19 are being searched more and more. But what is interesting to see is that Joe Biden’s view on the crisis is also being searched and potentially weighed against the incumbent’s actions.

I initially hypothesized that the COVID-19 pandemic would take over all search interest and people would forget the election was still happening. I was pleasantly surprised that except for specific areas (and I’m sure it’s not just limited to NYC), Americans are still very much engaged and searching for information as the election approaches. Specific issues raised by candidates are even seeing an uptrend as the pandemic highlights the hardships many of us are going through. While there is not going to be much concrete direction for anything until a new normality is established, we can see how COVID-19 is affecting US Google searches and how it may shape policies for the years to come.

How are your industry’s search trends being impacted by the pandemic? What uptrends are you seeing? Please comment below. 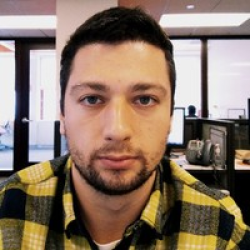 Aleks Shklyar
Aleks Shklyar is an SEO expert working in the search industry since 2012. With both in-house and agency side experience, he aims to provide actionable advice as well as educate internal teams to give them the SEO skills they need in their day to day.